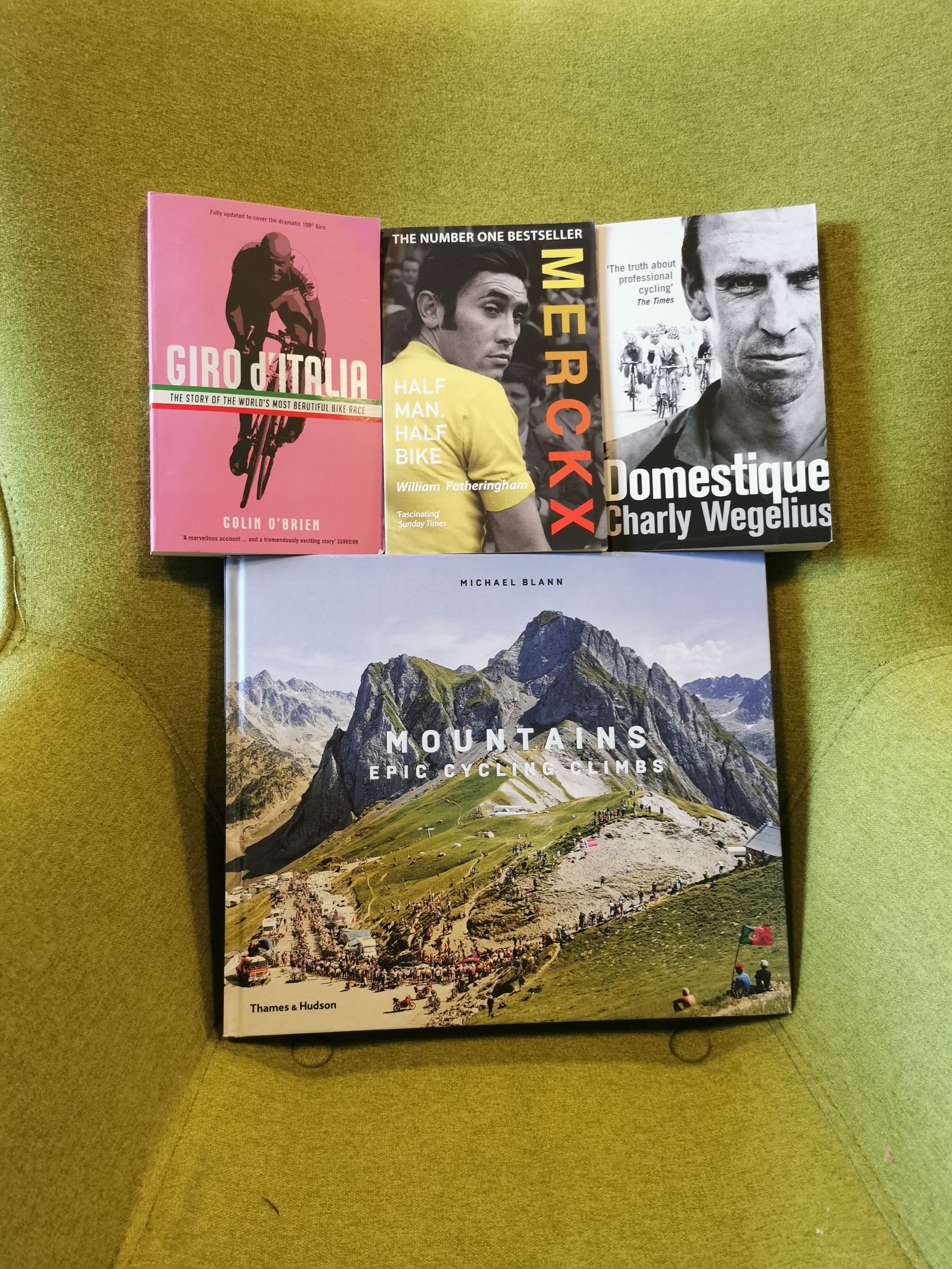 The thing is simple. By reading books you discover a world you don’t necessarily see when watching. Books give you time and space to place what you read within the framework of what you are visually only indirectly capturing. The world is really a much deeper place.

Watching cycling on television, you only see the current struggles and tactics that determine the suffering of the cyclists. But what makes cycling much more interesting is the vast history that preceded what we see today. The history of the locations through which the bicycles pass (not necessarily related to bicycles), the history of cycling in those same locations and the personalities and (or) imperfections of cyclists who ride or have ridden through those locations.

Since Giro'd Italia is currently on our minds, we recommend a handful of books that nicely describe this cycling boot a little further to the west from us:

GIRO D'ITALIA - THE STORY OF THE WORLD'S MOST BEAUTIFUL BIKE RACE

A National Tour that started for the same reasons as the other two - the promotion of the newspaper Gazzetta dello Sport. Apart from the inventing the Giro iself, this newspaper is also popular for its pink pages ...... That is why the leading jersey is pink ... Basically, a book that takes you through the long and rich history of racing on the only European boot shaped country. From Ottavio Bottecchia and his resistance to the regime of Benito Mussolini, Fausto Coppi and his blind physiotherapist and the eternal competition with the equally brave hero Gino Bartali, the first breakthrough of Anglo-Saxon culture into this Eurocentric sport through the victories of Andy Hampstein and Stephen Roche,to the eternal hero of modern cycling and the participant of the darkest age in this sport - Marco Pantani. The ideal book for all fans of the race for pink......

HALF MAN, HALF BIKE. EDDY MERCKX

The first national tour that this unstoppable cycling "cannibal" won was the Giro d'Italia. There he got his first big opportunity and there he announced himself to the world. An age where being second meant being nothing more than the best loser. A cyclist whose career is inseparable from Italy and its most famous cycling race. This book is a tribute to his sporting spirit, an insatiable desire to win and dominance that the sports world rarely sees.

DOMESTIQUE, THE TRUE LIFE UPS AND DOWNS OF A TOUR PRO - CHARLY WEGELIUS

A book that ingeniously describes tragic heroes that only exist in cycling. Representing the majority who sacrifice their careers for the careers of others, this story is probably the bitterest pill you will take, but also the happiest job for the heroes who will undertake them. In the various reincarnations of the Italian teams Alessio - Liquigas - Liquigas Cannondale, Charly Wegelius has been a faithful service provider aka domestique to many winners and champions. Sometimes slower than all, but always the most valuable among equals. An honest and warm story of cyclists who never, but never find their way to the spotlight. They don't even want to.

An extremely luxurious coffee table book enriched with more than 200 exceptional photographs by the famous photographer and graphic artist Michael Blann. Valuable photographic art created through 6 years of following professional cyclists in the most important and historically richest mountains in Europe. Logically, many of the climbs from this luxurious binding are part of the Italian circus and race for the pink every year. In addition to this exceptional photographs, the book also contains more than 30 essays written no less than by authors such as Romain Bardet, Greg LeMond, Stephen Roche, Geraint Thomas, Bernard Thevenet, Lizzie Deignan, Philipa York, Andy Hampstein, Ivan Basso..... They all describe their encounters with the mountains that determined their lives and careers. 254 thick pages of pure pleasure.

All books we present and sell are in English only. Namely, small circulations and relatively expensive rights are too much trouble for editions of these titles in the Croatian language. If you are not sure about the presented titles, you can read (and feel) them with coffee or beer in our coffeshop. Welcome!

Are you sure you want to perform this action?